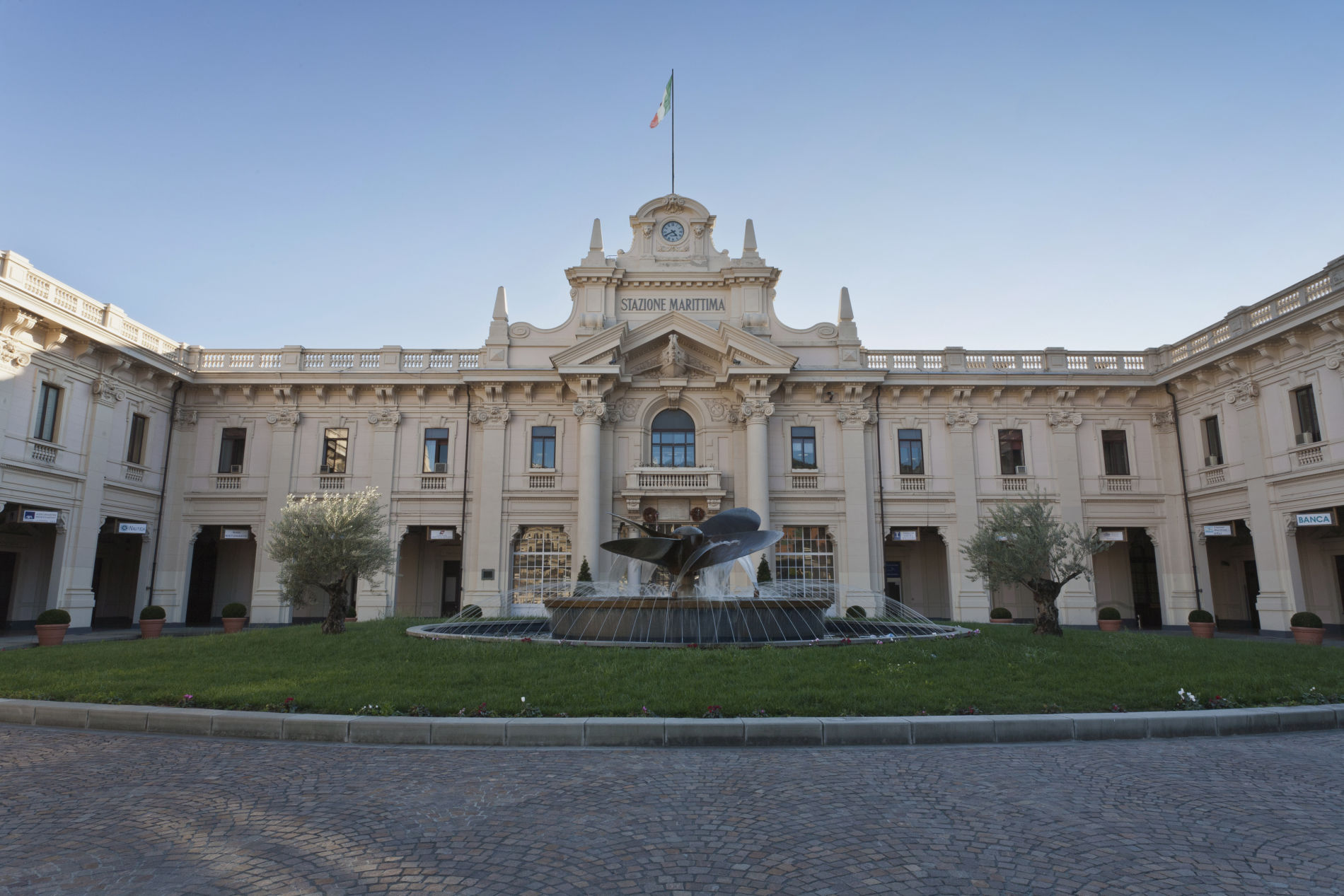 In front of the Historical Port area, Palazzo San Giorgio (1) leads into Piazza Bianchi,
site of the Loggia dei Fieschi which testifies to the life and works of the Genoese saint,
Caterina Fieschi Adorno.
In this area you can view the “Madonnette”, ancient votive shrines built by the Craftsmen’s
and Shopkeepers’ guilds at the street corners, and ornamental religious panels above doorways.
Particularly noteworthy, the “Adorazione dei Magi” (the Adoration of the Magi)
from the 15th century, in Via Orefici.
Past Piazza Campetto, in Piazza San Matteo (2), the patrician Church of San Matteo and the palaces
of the Doria family are a magnificent example of what may be termed a medieval aristocratic “settlement”.
The crypt of the Abbey is the resting place of Admiral and Prince Andrea Doria.
Continuing your walk up Via San Lorenzo, behind Palazzo San Giorgio,
you reach the Cathedral of San Lorenzo (3).
The alternating black and white stripes of white marble and grey slate accentuate the grandeur
of the imposing facade.
Since the era of the Crusades, it preserves its treasures:
the Ashes of Saint John the Baptist, Genoa’s patron saint, and a priceless collection of the sacred treasures
of the Cathedral and the city are on display, in the adjoining Cathedral Treasury (Museo del Tesoro).
From the Sacred Basin - Relic of the Last Supper - to the Dish that is traditionally believed
to have held the Baptist’s head, from the Cross of Zacharias to the beautiful processional chests,
everything narrates, in a captivating presentation, marvellous stories that almost seem legends.
Continuing in the direction of Piazza De Ferrari, you come to the Chiesa del Gesù,
whose origins date from the 6th century.
Rebuilt in the 17th century by the Pallavicini family, amid baroque splendour,
it features outstanding works of art, which include the “Circumcision” by Rubens over the main altar.
Moving on into the heart of the old city, the Church of San Donato, nestled in the fabric
of the medieval roads along the lower slopes of the hill of the Castello, is a fine example of Romanic architecture, characterized by a beautiful Byzantine-inspired tower.
The splendid triptych depicting “The Adoration of the Magi” (1515), commissioned
to Flemish-born Joos van Cleeve by nobleman Stefano Raggi who resided in this area, is on display.
The hill, dominated by the historic Torre degli Embriaci (4) (Tower of the Embriaci),
is home to the monumental Basilica of Santa Maria di Castello, which dates from the 7th century
and was rebuilt and expanded in 1442.
With the adjacent Dominican convent, it constitutes an extraordinarily important group
of buildings in terms of history, architecture and art. Not far from the porticoes of Sottoripa (5),
by the Historical Port, Palazzo Spinola di Pellicceria (6), seat of the National Gallery of Liguria,
is open to the public. Nearby, from Piazza Banchi (7), Via San Luca (8) leads
to the exquisite Church of San Luca, which is decorated with frescoes and contains
a fine nativity by Grechetto.
Close to Piazza Banchi and Piazza Soziglia (9), Piazza delle Vigne (10), with the millenarian Basilica
and its splendid Romanic belltower, is worth a visit. Continuing your walk through these streets,
the Basilica of San Siro (11), the earliest cathedral of the city, in the heart of the medieval quarter,
is cited for its ornate baroque decorations.
Here the Saint Bishop of San Siro is reputed to have performed the “miracle of the Basilisk”.
This area, which was originally home to the noble Lomellini family, features the baroque Church
of San Filippo Neri and the Basilica of the Santissima Annunziata del Vastato,
one of the finest examples of its kind in Genoa.
After walking along the “Via Aurea” - today known as Via Garibaldi (12) - and Via Cairoli (13),
you reach Piazza della Zecca (14), followed by Via Balbi.
Walking down this street in the direction of the Cruise Terminal, you reach
the Church of San Giovanni di Prè (15) (1180) of the Knights of Saint John of Jerusalem,
subsequently known as the Order of the Knights of Malta.
This area is also home to Chiesa Inferiore (Lower Church) and the Palazzo della Commenda -
originally used by cavalier monks and pilgrims travelling to the Holy Land -
which, together with San Giovanni di Prè, constitute one of the most architecturally interesting ensembles
of Genoese Romanic art.
A significant event in its past is the return of Guglielmo Embriaco “Testa di Maglio” to Genoa in 1098
after having conquered Jerusalem and Caesarea.