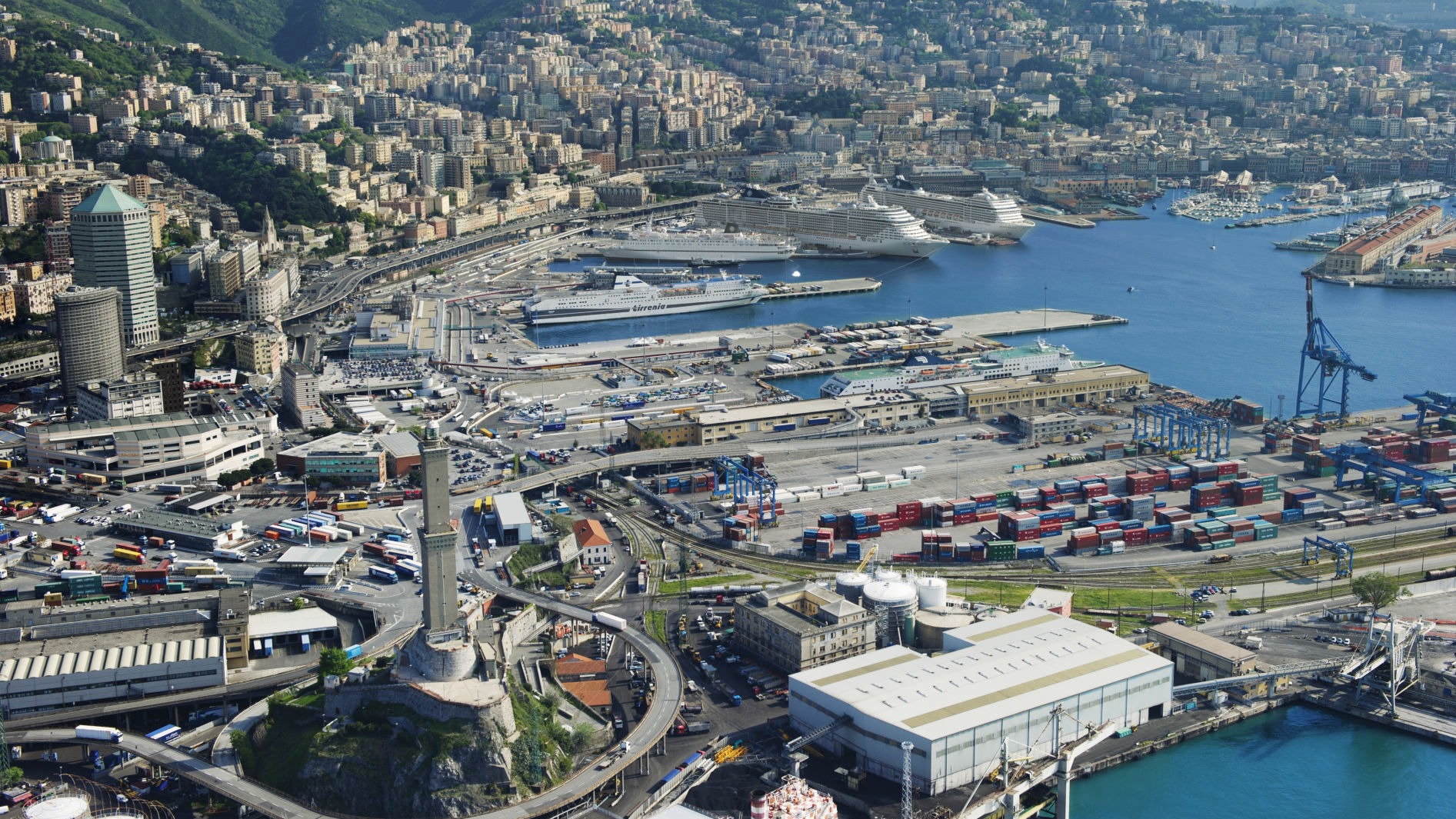 Are you a cruise passenger?
Book your car park.

Click on the button, fill out the form and book the park for your car.

All information on traffic and assistance for passengers with disabilities or reduced mobility. 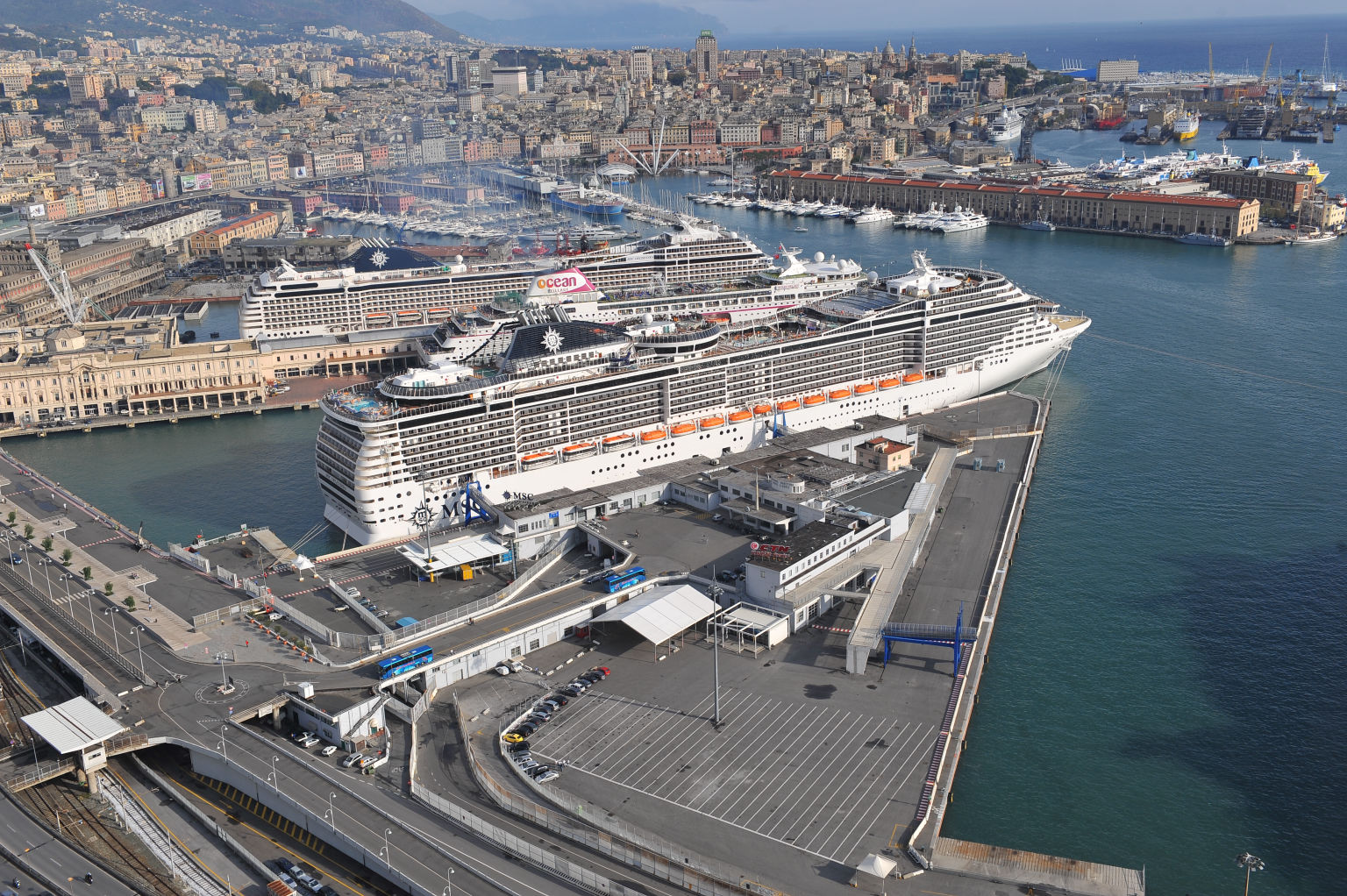 It was decided to build a Maritime Station on the Ponte Andrea Doria as soon as
the Ponte dei Mille Maritime Station proved to be inadequate for the new generation
of great transatlantic liners, which required due to their size, longer stopovers and a suitable draught.
Accordingly a plan was drawn up in 1931 by the Technical Department of the Independent Consortium of the Genoa Harbour which was submitted to the judgment of the architect Luigi Vietti, at that time Director of the Board for the Preservation of Monuments.
Although he maintained the general layout that followed the functional arrangement of the previous station, with the quay level reserved for the third class and the upper floor for first and second class, Luigi Vietti (Novara 1903 – Milan 1999), a young exponent of the M.I.A.R. (Italian Movement for Rational Architecture), made some changes: he redesigned the main façade replacing the two large multi-section windows in the wall facing the entrance with two large plate glass panes, and he inserted concrete and glass panels in the cantilevered roof to give light to the areas below.
He also simplified the lines on the eastern side, eliminating the moulding around the windows, and finally he placed a large window at the head of the embarkation passageway and a spiral staircase, later destroyed during the war, which connected the disembarkation deck with the observation terrace.
Vietti supervised even the smallest details of the internal layout: from the door handles to the banisters, and from the lighting fixtures to the radiators.
Of the furniture designed by the architect, the curved lamellar walnut armchair is of particular interest, being a reinterpretation of a typical Alvar Aalto curved chair in beech wood. This model was presented by Vietti, in 1933, at the 5th Milan Triennale,
the same year in which the recently completed station was enthusiastically received in Italy and abroad by leading architecture magazines.

Thanks to numerous adaptations and enlargements carried out over the years both on the infrastructures and on the quay areas, today Ponte Andrea Doria is fitted with a modern, functional and well-equipped terminal. The total surface area of the Cruise Terminal of Ponte Andrea Doria is of about 10,000 m2, with spacious check-in areas, large customs halls for baggage collection, dedicated and separate routes for embarkation and disembarkation flows and terraces with mobile walkways for connection with the ship.
The terminal has adopted the most advanced solutions in terms of comfort and services for passengers, as well as being in line with all the security regulations.
The two berths, in terms of length and draught features, can host ships of the latest generation in complete safety and handle an overall movement of up to 10,000 passengers a day. With the moving of the adjacent Cesare Imperiale viaduct inland, ample parking areas have been created for the coaches and cars being used by cruise goers.
To facilitate the operativeness of the latest generation cruise ships, further extensions are in progress in the terminal that will increase the surface useable by passengers. 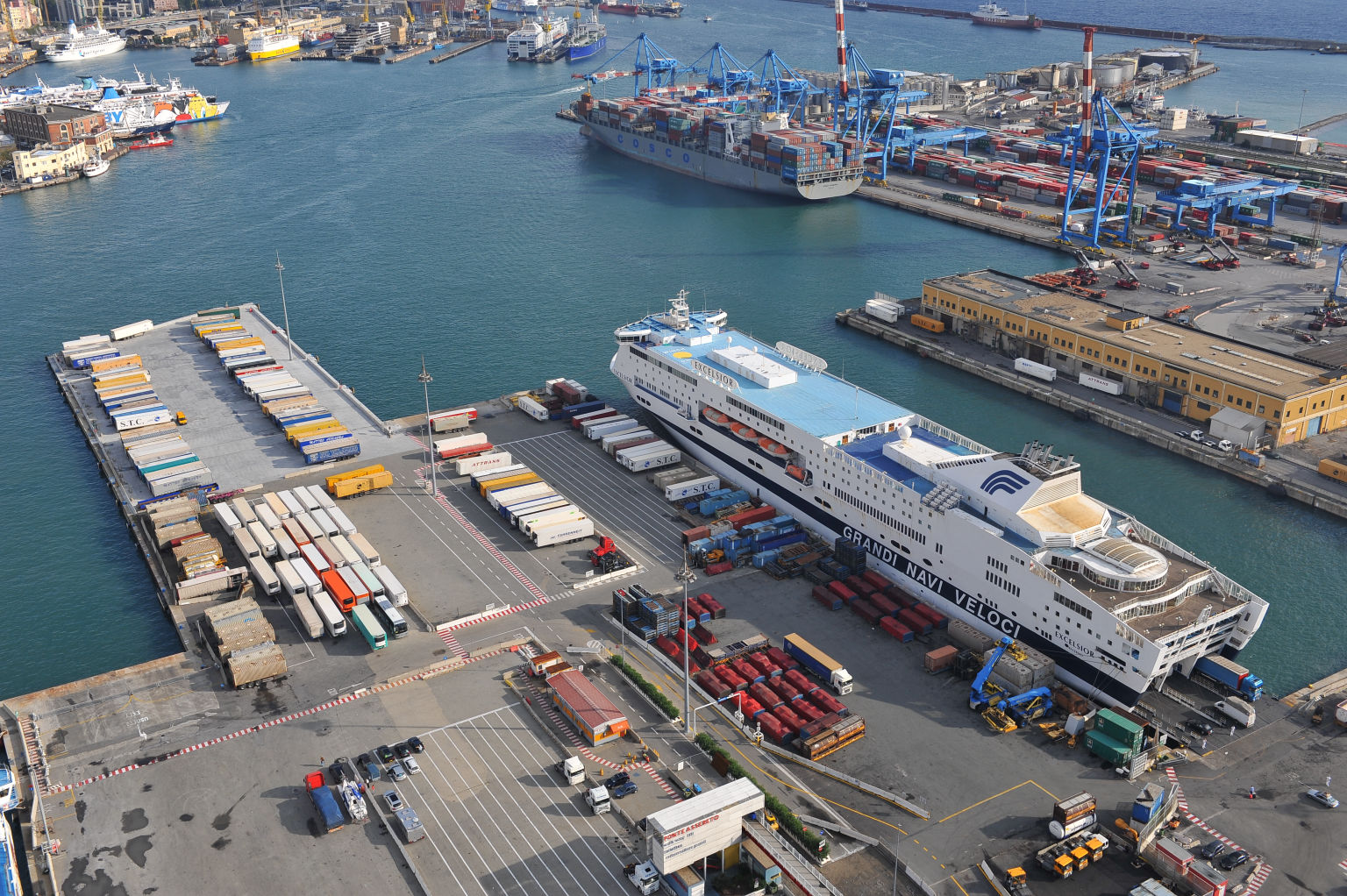 The Ponte Caracciolo Passenger Terminal and berth are located in the western part
of the passenger area bordering on the commercial traffic area.
The Terminal was designed and built to deal mainly with the changing operating and security needs of the non-Schengen ferry traffic.
On the other hand, like all the other terminals managed by Stazioni Marittime S.p.A.,
given its modern layout and the high level of comfort and quality, this Terminal can also meet the different needs of the cruise ship traffic.
The passenger lounge extends over two floors with a total surface area of about 2,300 square metres.
It includes police and customs posts, ticketing offices, waiting-room areas with a bar-restaurant annex with no barriers to access since the various levels are connected by escalators and lifts.
The design and construction of the Terminal was commissione and financed entirely by Stazioni Marittime S.p.A. 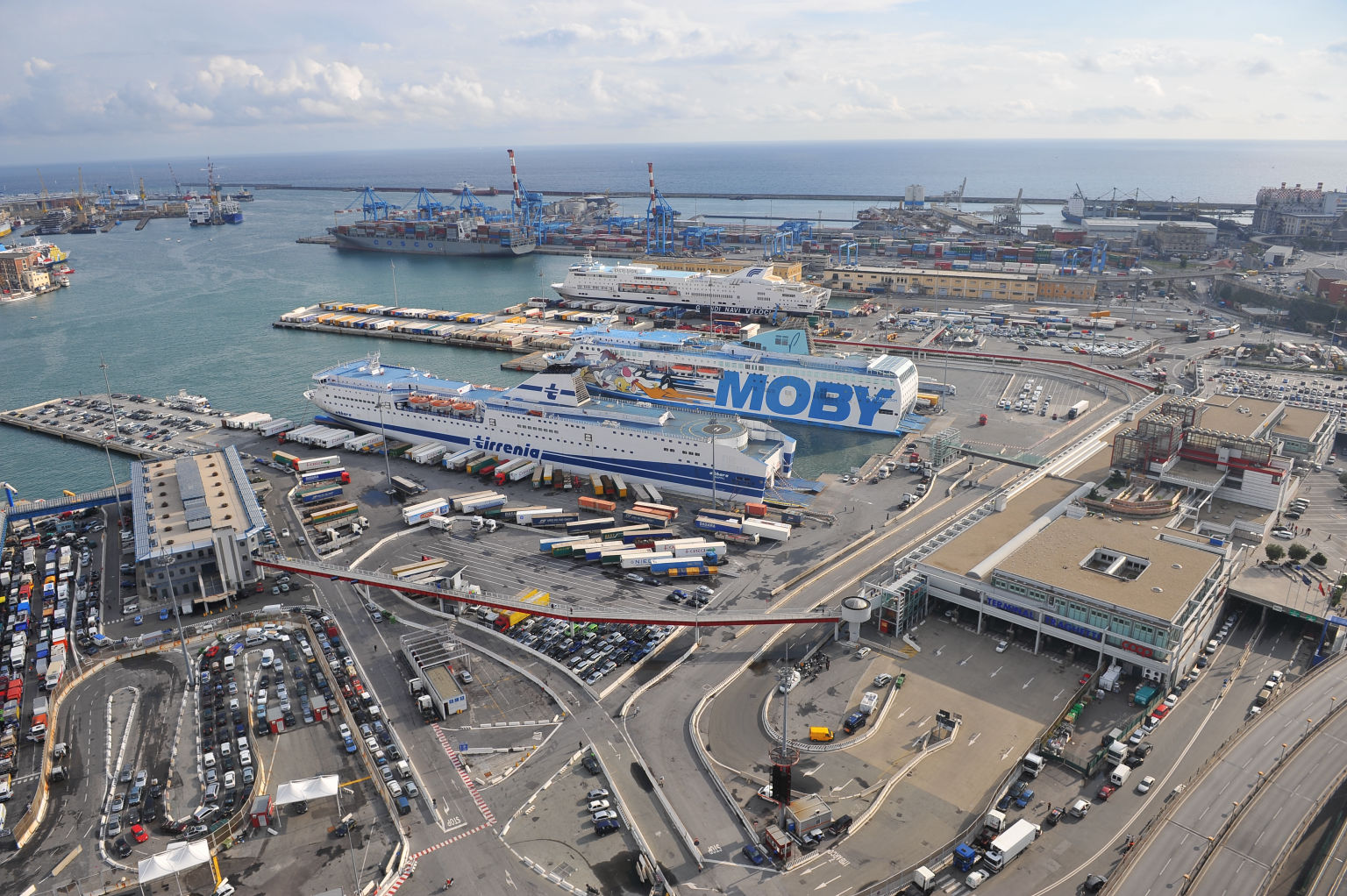 In 1999 Stazioni Marittime S.p.A. inaugurated a modern Ferry Terminal, where which businesses serving the urban area operate alongside those targeted at ferry traffic, due to a complete computerisation of the embarkation procedures and to modern and functional infrastructure and services.
The Terminal, situated in the Calata Chiappella area, in a strategic position between the four berths of Ponte Colombo and the five of Ponte Assereto, is an important reference point for passengers en route to Sardinia, Sicily, Corsica, Spain, Tunisia and Morocco.
This Terminal was designed to manage the large flow of passengers, heaviest during the summer periods, and provide the facilities, quality and standard of services and comfort required by the changing and ever-growing needs of the tourist market in general and the ferry market in particular.
The building consists of several levels covering a total floor surface of about 12,000 metres without architectural barriers.
Indoor, in addition to offices, ticket offices and passenger waiting-rooms,
there is a shopping centre with a large supermarket and various other businesses and services.
The shopping centre, designed to provide a space for passengers to spend time prior to embarking, can also be used by the general public on a year round basis: thus it has created a valuable alliance, in as much as the structure does not depend exclusively on the seasonal ferry traffic but is fully exploited as an integral part of the city.
The Terminal has two panoramic promenades to access the embarkation and disembarkation areas as well as a connection with the adjacent quay for the so-called “city boat” that operates between the commercial and the tourist city harbour.
All of this makes the building an ideal access point from the city to the port.
The relevant security measures and controls allow surveillance of all access points and areas of operation, while embarkation points can only be accessed by ticket-holding passengers.
Every year, an average of 3,000,000 passengers, 900,000 cars and 300,000 commercial vehicles pass through the Genoa Harbour ferry area, with peaks during summer weekends of 120,000 passengers and 40,000 cars.
In addition to constant monitoring of traffic conditions, fixed signals and variable messages on electronic display signs, these large flows of traffic are also managed
by a system of telecommunications and computerised technologies, with nineteen check-in points that can control and direct the traffic, speeding up access time to the embarkation areas.
The commercial vehicles use different routes from the passenger vehicles
and these are appropriately signed and monitored.
In response to the differing needs of the non-Schengen traffic to which new security regulations apply, three areas have been created specifically for traffic to Tunisia and Morocco, appropriately marked off and equipped with police and customs posts. 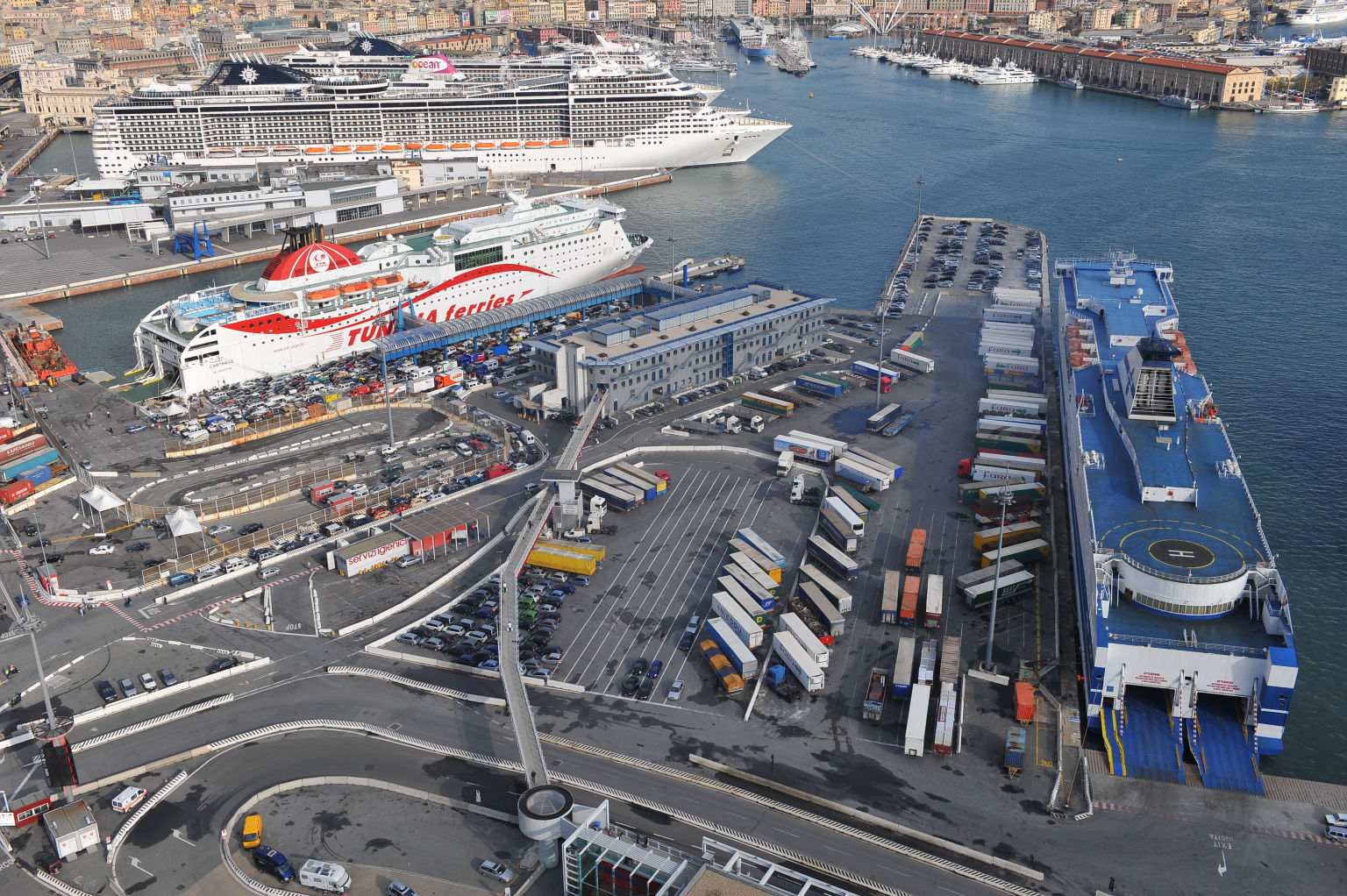 The Ponte Colombo Passenger Terminal is in the heart of the ferry area and was restructured from a pre-existing building that dates from 1920.
The building, with its four adjacent landing stages, is principally destined for the traffic
with the North African countries, but it can also be used for other ferry routes and by cruise ships.
The terminal consists of several floors with different uses, covering a total surface area of 6,000 square metres and it is linked, by a promenade, to the nearby Calata Chiappella Terminal.
The basement floor provides garage space for passenger vehicles in the process of embarkation on cruise ships and ferry terminals, while on the ground floor there are warehouses for companies working in the harbour area or providing services to the harbour.
On the first floor, there is the passenger hall covering a surface area of about 2,500 square metres.
Inside this area are the ticketing services linked by escalators, the information desks, the toilet facilities, large waiting room areas for passengers and the flow of tourist traffic and the handling of baggage, refreshment facilities and areas for customs and police controls.
From the passenger atrium, by taking the public lift, one can access a roof garden, which offers a superb view of the Passenger Port and the Old Harbour area.
From the Terminal level there is a pedestrian link to the boarding and disembarkation area which, on the eastern side, runs parallel to the new Ponte Colombo quay, suitably redesigned to facilitate the berthing of the latest generation of ships.
From the embarkation terrace it is possible to board the ships directly by means of an escalator.
The second floor of the building is assigned to office space. 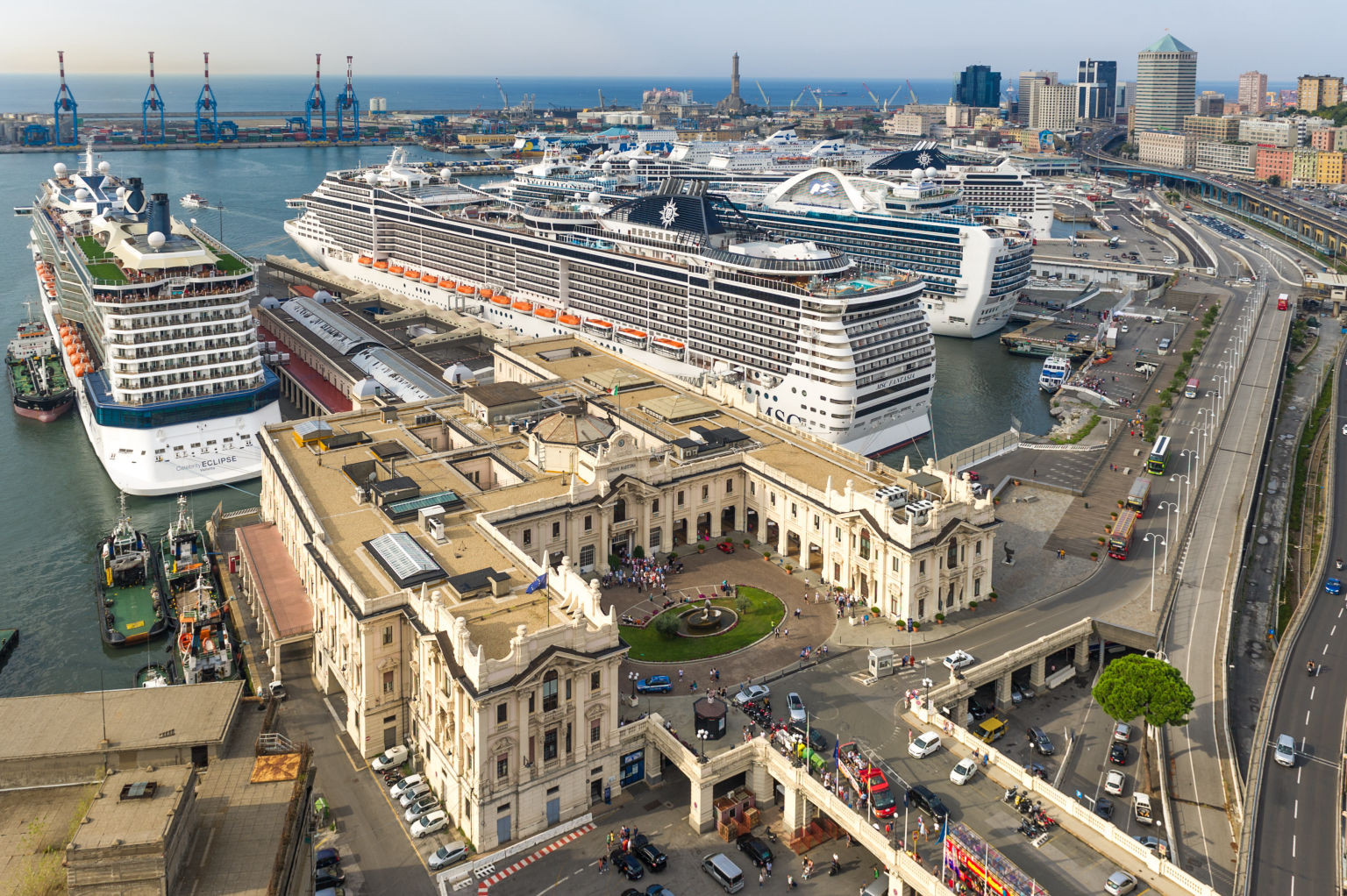 In the historical Maritime Station of Ponte dei Mille an ample, modern and comfortable space is dedicated to the cruise terminal, occupying three floors on an overall surface of about 18,000 m2, of which 4,500 m2 of embarkation terraces fitted with electro-mechanical, mobile walkways for connection to the ship.
Inside there are large halls for disembarkation, waiting rooms, check-in areas, border crossing control points and all types of service for passengers. Dedicated routes divide the embarkation flows from those of disembarkation.
In 2001 restoration of the charming first and second class halls of the historical Maritime Station of Ponte dei Mille allowed us to once more place these splendid rooms at the disposal of passengers, with no interruption with the past. They are suitably equipped with all the most up-to-date fittings in terms of comfort, safety and technology.
The terminal can host three cruise ships at the same time with an overall daily movement of up to 12,000 passengers.
Inside the terminal there is also the control room, through which the entire area managed by Stazioni Marittime S.p.A. is monitored 24 hours a day.
Ponte dei Mille, just like all the terminals managed by Stazioni Marittime S.p.A., is subject to ongoing modernisation and adaptation to improve operativeness and the reception of passenger ships in relation to the constant development of the cruise market.

All passengers, also underage (0-18 years old), who board, must be in possession of a valid identity document.